My quest to design and build a mid-engined sports racer from scratch. It will comprise of many newly fabricated components along with repurposed parts from other vehicles such as the 2.5 Turbo engine from a Volvo 850 the running gear from Mazda Mx5 and the driveshafts from a sierra xr4x4. The body work is the only thing I have purchased and even that will be extensively modified and a complete front section made from a mould. Wish me luck. 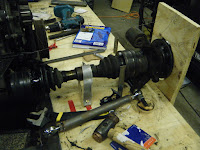 Got the right rear suspension upright located and have started to build the suspension links.
Posted by Liam Mc at 07:58 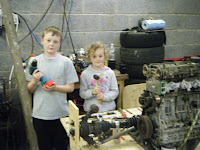 Recruited some help from next door!
Posted by Liam Mc at 07:53

Rear of the car-Some Progress

After what seems like a year I have got back on with things.
Good couple of days!  Next build the lower rear suspension links.

I modified all 4 front wishbones to take inboard rose joints.  When I have decided the location of the inboard pickup point (by string computer) I can very quickly mock the front wishbones and have my matey Steve weld them up for me.
Posted by Liam Mc at 03:54

With the engine mounts sourced it was time to figure out where they would tie into the chassis.  I chose the right hand lower mount first as it looked like it would land conveniently on a chassis rail.  I was worried about bolting the bracket to the 2”x1” tube so I carefully marked out the mounting holes on the tube and machined 2 threaded bosses which were welded into the chassis tube.  The mounts used odd proprietary bolts with an in built locating washer so I machined some stepped buttons to accurately secure the mount against any lateral movement.

My wife and I took some very accurate measurements of the rear wheel and upright assembly.  I then transferred the measurements to CAD and produced the 0.5 scale silhouette ready for the “String Computer”.  If you’re not familiar with this concept its a method of cheaply modelling suspension geometry using a board and string line.  Its outlined a couple of Alan Staniforths books on car design and builds.  This will then allow me to site the inboard pickup points for the rear suspension and then ultimately build the rear wishbones.  I’ll take an identical approach on the front suspension and modify the wishbones from my old project accordingly.
Posted by Liam Mc at 03:54

Not posted for a while but that doesn't mean I haven't done anything.  As mentioned before I decided finally on a suitable track width which allowed me to mock up the wheelbase at an approximate ratio of 1.6:1.  The car is quite wide so at 1.6:1 I’m looking at a wheelbase of 2.9m.  I’m going to look at some other wheelbases of cars I’ve driven to see how this compares.

I visited Ian (a Volvo breaker) to try and find some of the OEM engine mounts used on the Volvo T5 engine.  After a rummage around in his shed I left with a bunch of engines mounts and the gear stick assembly and control cables for the M56 gearbox.  The control cables are too short for my application so I will need to either modify the mounting brackets for the cables and try and fudge a solution or, preferably, buy new longer control cables and use the assembly as intended.  It turned out the front engine mount I bought from Ian was the wrong type so I will have to try and source the correct one.  It would appear they used a few different types on the 5 cylinder white block engine.
Posted by Liam Mc at 03:54

Tonight I took some measurements and cut the drive shafts to length which allowed me to arrive at a final overall rear wheel width of 1818mm.  I'll get the shafts welded up tomorrow.


I also started making some engine mounts, the plasma cutter doesn't like 5mm plate much.  I got one engine mount plate done though.  To save time though I think I'm going to try and get hold of the OEM mounts.

Starting the chassis is drawing ever closer.
Posted by Liam Mc at 15:06

Land rover engine mount, I have been practicing with the plasma cutter doing round base circles for the eventual engine mounts.
Posted by Liam Mc at 12:21

Using Sierra outer stub axles and Volvo 850 inner shafts and CV meant that I would have to make or have made hybrid driveshafts.  For the purposes of setup I decided to cut, sleeve and weld the shafts that I had.  When I have decided on a final track width I can use the cut and shut shafts as an exact pattern for a driveshaft shop to produce.
Posted by Liam Mc at 12:14

Been working on the rear drive train.  Will be using a pair of Mx5 rear uprights but with modified Ford Sierra xr4x4 stub axles and uprights.  Had to machine a tiny bit off the Sierra hub but nothing major and was remarkably close to the Mx5 dimensions anyway.

The reason for wanting to use the Sierra stub axle was to be axle to have a replaceable CV joint plus removing the shaft without damaging the CV joint on an Mx5 stub axle is a PITA.  Also there are uprated parts available or the Sierra CV's and I am planing on throwing well over 300 HP at it.
Posted by Liam Mc at 12:09

The Start-This is the third scratch built car I have started, I am determined to see this through.

My Dad and I constructed a 12'x1700mm build table, you can see the donor Volvo engine sitting on the top.  The table still needs bracing to sure it up but is pretty sturdy.
Posted by Liam Mc at 16:36 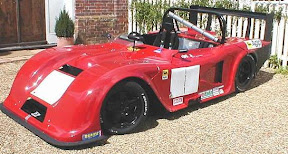